Skip to main content
Home » News/Views » The making of value

The making of value 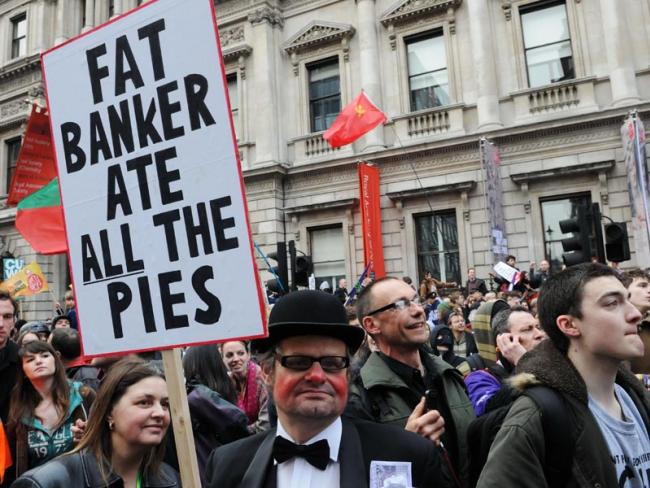 A clear message from the TUC anti-austerity rally in London, March 2011. Photo 1000 Words/shutterstock.com.

The banks have managed to convince many that they create wealth. Really?

Mariana Mazzucato is Professor in the Economics of Innovation and Public Value at University College London. She has researched and written about the connection between innovation and growth. See Workers March/April 2015 for a review of her book The Entrepreneurial State: debunking private versus public sector myths.

Mazzucato writes that “It is…only through an open debate about value…that we can help…transform the financial sector into one that is truly focused on nurturing value creation in the real economy.” And again, “critiques…will remain powerless…until they become firmly grounded in a discussion about the processes by which economic value is created.” But she does not explore why critiques are on their own powerless to change the financial sector into a force for creating value.

She notes the labour theory of value and consistently criticises its supposed refutation by capitalist cheerleaders espousing the marginal utility theory. She writes, “Rent – which was regarded as unearned income – was classified as a transfer from the productive to the unproductive sector, and was therefore excluded from GDP [gross domestic product]. But if, as marginal utility holds, the ‘services’ of a landlord or hedge fund manager are treated as productive, they magically become part of GDP.”

As she points out, “Until the 1970s, the financial sector was perceived as a distributor, not a creator, of wealth, engaging in activities that were sterile and unproductive. At that point, through a combination of economic reappraisal of the sector and political pressure applied by it, finance was moved from outside to inside the production boundary – and in the process wreaked havoc.”

Value extraction passed for value creation and the value extractors laughed all the way to the bank. We see this every time a retailer or service company folds after having been passed from one venture capitalist to another until nothing is left.

‘The value extractors laughed all the way to the bank…’

Capitalists know that the minimum labour time spent on producing a product determines its value. Marx’s labour theory of value shows how a large part of the value that we as a working class produce goes to benefit the capitalist and not society. Through exploitation “value is extracted from labour’s share of earnings in order to restore corporate profits.”

Mazzucato claims financial regulation can be used to reward long-termism and also help to direct finance towards the real economy, as opposed to feeding on itself.

But why has this rational policy not yet been implemented? Mazzucato ducks this vital question. She repeats that we can control markets, but she never says how we can do so. Merely showing that a policy is rational is not enough. For example, what happens if we try to nationalise some industries and to set up investment banks in a “mixed economy”? When we do not own the keys to all the banks, the capitalists will hit back and wipe out any gains.

The financial sector does not serve the wider productive economy. The average holding time for equity investment in the USA fell from four years in 1945 to two in 2008 to just 22 seconds in 2011. Mazzucato says there’s good evidence that companies finance most of their investment in production and new product development internally through their own resources. Only 15 per cent of funds generated by the finance sector go to businesses in the non-financial sector.

In 2000 Britain’s Competition Commission found that the big four banks had agreed not to compete in their services for small businesses, using their 90 per cent market share to extract £2 billion a year profit and push their average return on equity to 36 per cent.

Then when the banks caused the 2008 crash, the state bailed them out, and ultimately workers pay the price. The Federal Reserve’s Quantitative Easing schemes totalled $4.2 trillion in the period 2008-14. The Bank of England undertook £375 billion of QE between 2009 and 2012 and the European Central Bank committed 60 billion euros a month from January 2015 to March 2017.

Their profit, our loss
No good comes from the rich