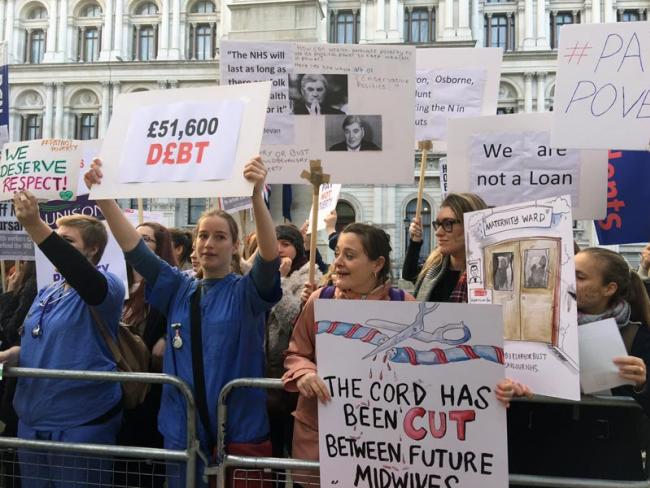 War abroad, war at home. As parliament was debating the bombing of Syria on 2 December, less than 100 yards up Whitehall student nurses and midwives were standing outside the Department of Health in a loud and lively protest against plans to scrap their bursaries.

The demonstration was called by student nurses and organised at short notice via Facebook, supported by four unions: Unison, the Royal College of Nursing, the Royal College of Midwives and Unite. On their Facebook page, the nurses point out that the scrapping of bursaries will affect people studying to become nurses, midwives, occupational therapists, speech and language therapists, podiatrists, radiographers, dietetics and those studying for a degree in Operating Department Practice. It could even affect paramedics.

The changes will leave nurses deep in debt, with no hope of paying it off. Presumably the government reckons it will just import nurses from poorer countries of Africa and Asia, scrounging off the education systems of others – and never mind that those countries desperately need nurses.

In their call for support, the student nurses made an explicit plea for there to be no party political placards. “We want to keep this focused on the core issue!” they said. Predictably, ultraleft organisations ignored this and came along with their branded placards.

The less you earn, the higher the interest
The road to £9,250 fees
Fight the fees? There’s no time like the present
Universities discriminating against British undergraduate applicants
Huge rise in student loan rate