Taking on the union myth-makers 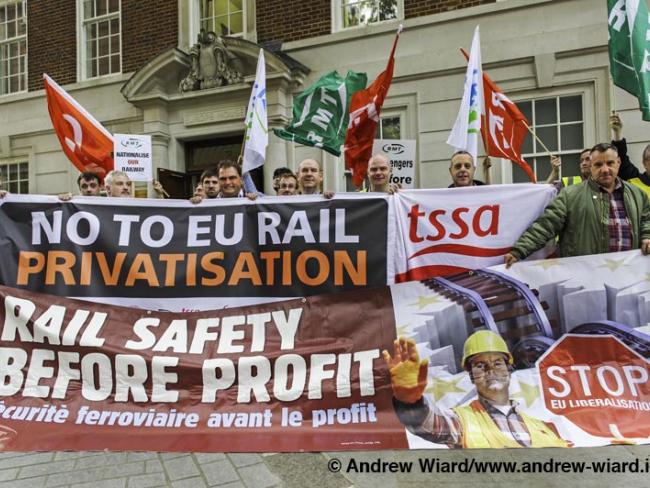 Joint RMT and TSSA demonstration against the EU outside its London headquarters, 2013. Photo Andrew Wiard/www.andrew-wiard.info

Just about every union in Britain has policy opposing privatisation. Many are committed to fighting TTIP.

It is the EU that is spearheading these attacks on workers. Yet most unions are in denial. Take Roy Rickhuss, general secretary of steelworkers’ union Community. “I say it is not on the side of working people to threaten the United Kingdom’s membership of the European Union,” he wrote on the union’s website on 25 September. Tell that to steelworkers whose industry the EU tells us we cannot support.

One union is certainly clear. In line with a motion carried at the RMT conference in Newcastle at the end of June, its general secretary, Mick Cash, has spoken clearly about the EU’s “anti-worker agenda”. His union called in June for an out vote in any referendum on the issue:

“EU policies are at odds with the aspirations of this union as the various treaties and directives are demanding the privatisation of our rail and ferry industries,” he said.

• Related article They call this protection?