Skip to main content
Home » News/Views » They call this protection?

They call this protection? 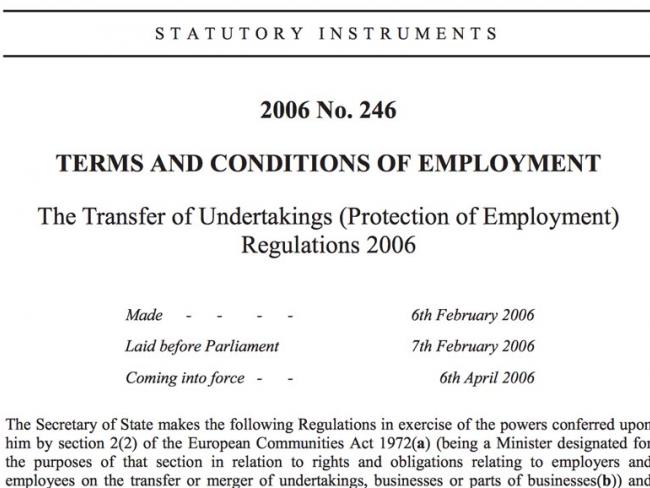 Much the same could be said about TUPE, the Transfer of Undertakings (Protection of Employment) Regulations put in place as a result of the EU’s more starkly titled Business Transfers Directive.

TUPE is supposed to protect workers’ rights when a business is sold, by guaranteeing them the same terms and conditions when they move from one employer to another.

It is certainly true that it was introduced reluctantly as a piece of legislation originating in Brussels, in 1981. At the time, the junior Conservative minister David Waddington told parliament he was recommending TUPE “with a remarkable lack of enthusiasm”.

But had he known what TUPE’s effect would be, Waddington might have been more enthusiastic, and unions less so – especially as TUPE has offered virtually no protection on pensions.

The EU talks big about “solidarity” and workers’ rights. But in reality it has made workers’ rights subservient to the employer’s “fundamental right” to “business freedom”. It has done this through court judgements such as Alemo-Herron v Parkwood Leisure in 2013, where the right to be covered by a collective agreement after a transfer has been severely reduced.

The case covered former employees of Lewisham council, and initially an Employment Appeals Tribunal upheld their case. Then the Court of Appeal rejected it. Next the Supreme Court washed its hands of the case completely and referred it to the European Court of Justice.

The European Court sided with the employer on the basis that the right to run a company to make a profit is a more fundamental right than anything else. That’s the EU for you.

Just as importantly, a major effect of TUPE has been to disarm workers in the face of privatisation. By holding out faint promises that all will be well, it has allowed buyers of a company or providers of outsourced services to buy the staff lock, stock and barrel – and there is a real stick as well as the phoney carrot, because if you refuse to transfer you lose the right to redundancy.

So we get back to capitalism, pure and simple. TUPE plus the court judgements have returned to the original concept, effectively wage slavery: the new capitalist buys the company or service and its assets – including human ones.

That’s not to say that clever tactical thinking cannot take advantage of the regulations to strengthen union organisation and even postpone privatisation. For a recent example of how to do this, see the fight by Unison’s branch at the Royal National Orthopaedic Hospital to hang on to Orthotics.

But in the end, the outsourcing or sell-off will go ahead, and organisation will inevitably be weakened.