Teachers need to target their struggle 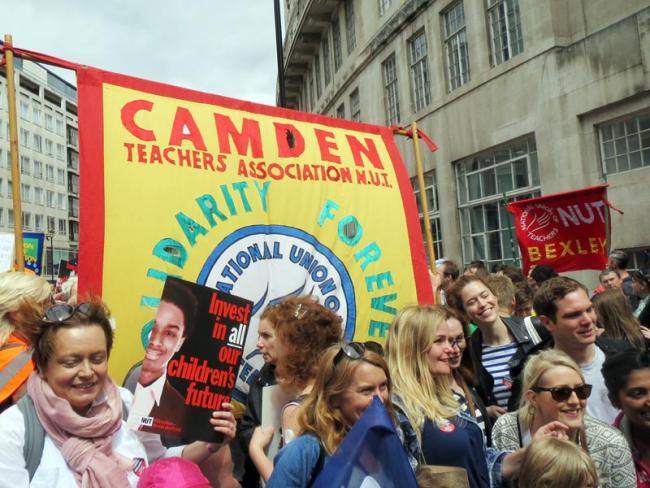 5 July 2016: Teachers gathering outside the BBC in central London before their march to Parliament Square. Photo Workers

If teacher unions are to protect and improve members’ pay and conditions of work, then tactics and strategy must be reconsidered and revamped. Otherwise they will be as powerless as beached whales deprived of the sea…

The organisation and delivery of education has changed radically in recent decades. This altered landscape demands that teacher trade unions overhaul how they operate if they are to make progress.

In recent years the National Union of Teachers (NUT), the largest and most active union, has tended to repeat the tactic of national strikes with marches and rallies. These have become ritualistic actions, tired and overused, where a strike becomes a form of ineffective protest and assembly, bereft of a negotiating arena. Instead, teacher unions need to channel struggle so that industrial action is targeted at those with powers of governance for specific schools.

The ineffective ritualised approach that now bedevils the NUT suits the so-called “activist” mentality that just wants to occupy time and space rather than advance the relative power of teacher trade unionism and make members more involved. Campaigns and industrial action ought to have a potential end-result, a likely collective improvement to teachers’ working conditions. Trade unionism is about improving the lot of workers, not endlessly repeating futile gestures.

One of the biggest changes in the educational landscape has been the dismantling of state and local authority planning and control of schooling. There is now a bewildering variety of arrangements: sponsored academies, multi-academy trusts (MATs), academy chains, free schools and grammar schools, and so on while the dwindling numbers of state schools have powers of decision-making over pay and conditions.

We have to accept that the old set-up has gone and alter the way we think. Nationally applied action, successful in the 1970s and 1980s because it reflected the situation at the time, is no longer the proper way to conduct struggle.

There was national negotiating machinery for teachers’ pay and conditions of service, known as the Burnham Committee, from 1919 until 1988. It was made up of representatives from teaching unions, local education authorities and government. But that tripartite world has gone. Thatcher’s government abolished Burnham following teachers’ guerrilla strikes in 1985-6. Overnight, teachers’ pay and conditions were imposed by the Secretary of State.

In 1991 the government appointed a review body to make annual recommendations on pay, with the final decision taken by government. Later, Labour abolished local education authorities.

In the past few years government has introduced further “reforms” that require schools to develop pay policies and make individual pay decisions. Decisions on performance-based pay progression are taken at school level. Official policy is that “starting pay can reflect local conditions”. In other words, pay less where the market can allow such a thing, for example schools in rural areas.

Similarly, conditions of service are effectively delegated. Nationally determined pay scales and incremental progression are no longer obligatory for all. Schools can move away from them, though teacher shortages have so far been an inhibiting factor.

State education applied through national procedures and local education authorities has been removed. Now the only remaining state role is the lever of inspection via Ofsted and financial provision. Teacher unions have to adjust to this less cosy environment and learn how to prosper in a fragmented, more private, sometimes privatised world. It can be done.

‘Repeated and untargeted national action is getting us nowhere.’

How do we apply union pressure in these new circumstances, this new reality? First, we must stop squandering and dissipating our strength in national set-plays of industrial action that are unable to force a settlement outcome. We must no longer pretend there is strength where there is not. Successful campaigns and action need to be directed at defending conditions and pay or extracting improvements in chains, MATs or self-governing schools.

Secondly, actions and campaigns must focus on reaching settlements, agreements and improvements inside the new negotiating units. The level of union activity must be raised within each self-governing school, MAT or chain until we can produce negotiated settlements on pay and conditions that bring real benefits to union members.

When the first breakthroughs happen, we can expect there to be a snowball effect as union groups elsewhere will want to imitate best practice. A culture among teachers of wanting to work in union agreement schools will encourage other management units to accede to later claims if they wish to retain their staff.

Predictably the politico element will be reluctant to change direction, preferring vainglorious posturing in the known to practical advances in the unknown. Their mantra will probably be “keep to national action, keep to national action”. But repeated and untargeted national action is getting us nowhere. Indeed over recent years the turnout of striking members is getting less and less, as lots of members see union strength is not being applied sensibly to get an outcome and realise the futility.

Strategy and tactics will have to change unless the union wants to become gradually ineffective and irrelevant. Members must be mustered to protect and improve pay and conditions of service within the new negotiating units.

The union will need to start where it is strong. Let those who feel most aggrieved and most willing to challenge have indicative ballots to test the water; where there is a high vote in favour, then that’s where trailblazing campaigns on pay and conditions can be initiated. Hopefully many managements and governing bodies will agree settlements in negotiation. Where feeling is strongest, those memberships can be balloted for industrial action to change the mind of intransigent managements.

To sustain this approach, the NUT will have to undergo a total transformation affecting probably all aspects of the union, including attitudes, structure and speed of decision-making. So far the NUT’s organisational structure is largely based on divisional associations that reflect the old education authorities, which no longer exist. There is a lingering attachment to geographical arrangements (for the national executive, divisions, regional officers) but in truth the old organisation does not reflect the new collective bargaining reality.

There will need to be an internal debate to discuss how to re-adjust the union to meet the challenges ahead. There will be no easy answers, but pragmatic modifications will emerge. All parts of the union will have to support and service the new thrust for collective bargaining at the negotiation units, which must become the central union task.

The proliferation of casework must be isolated and taken away from national executive members and regional officials, whose prime responsibility must become supporting negotiations and action at the level of the negotiating units. The same must apply to divisional officers. The growing union influence in workplaces will eventually counter fragmentation.

The role of the school representative will probably alter, with the skills of being able to unite as many teachers in a place as possible and to represent them with management being the most important. As getting breakthroughs on negotiations will depend on the involvement and pressure of a mass of teachers, sectarian stances and toleration of small union groups must disappear.

Even the union conference needs drastic surgery, if it is ever to regain a true position of “sovereign authority”. At the moment members rarely take any notice of it. At 1,700 delegates it is far too big and constructed around geographical determinants of divisions and regions.

Again, decisive discussions are needed about how to relate the conference delegations to the negotiation units on the ground. You don’t need more than 200 delegates, maybe less. Their authority will be greater for being fewer and more related to the importance of everyday negotiation and members’ working welfare.

This new approach will bring more members into active participation in union work, as they see it will directly benefit themselves and their work colleagues.