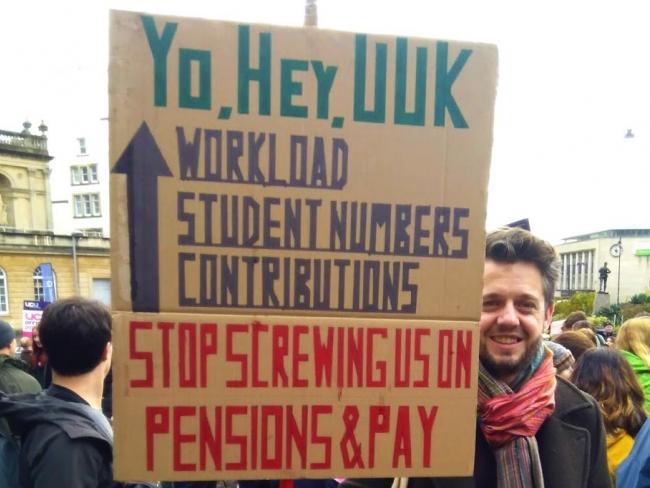 Hundreds of striking Bristol University workers and supporting students gathered on the steps of the Victoria Rooms to mark the beginning of their eight-day strike for better pay and pensions. Photo Workers.

University staff belonging to the University and College Union are sick of being taken for granted by the employer and are prepared to keep up the fight until they win their demands. They want more pay, better conditions, and assurances that their staff pension scheme will not rise.

“According to modelling by First Actuarial, because of the changes to USS, a typical member will pay around £40,000 more in to their pension, but receive almost £200,000 less in retirement leaving them £240,000 worse off in total,” says the union.

The union told the Universities Superannuation scheme that there would be action unless the level of pension contribution was kept to 8 per cent of salary. Instead the scheme hiked contributions to 9.6 per cent and failed to change the level during negotiations.

But it is noticeable that neither the employers nor the union is not mentioning the elephant in the room: that the rise in contributions is required because of actuarial assumptions dictated not by common sense but by the European Union, through the European Insurance and Occupational Pensions Authority, which regulates pension schemes throughout the EU.

They are also challenging their workload – which sees many working for more than 50 hours a week – and the use of casual contracts. The last strike took place in 2018, when staff eventually triumphed in their pensions-related argument.

Students were particularly supportive last year, recognising that their experience in the classroom is only going to be improved if they have less stressed, properly paid, decently employed teachers. The signs are that the support is still there. At Bristol, students made their way to the strike rally on 25 November chanting, “Students are workers too.”

A sustainable future for higher education
The dark hand of the EU
Putting profit above staff and students
Strong support in Glasgow for university pay and pensions fight
Pensions: thanks to the EU, it's not all over yet