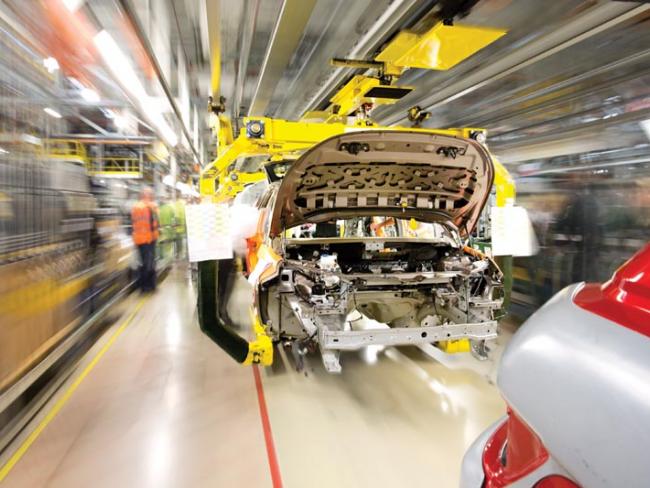 The Land Rover assembly line in Halewood, Merseyside, with the first Discovery Sport on its way down the line. Photo: Land Rover

Industry ought to be the core of Britain, the heart of our economy, because it is productive wealth creation. It is the engine of growth, as opposed to the illusion of wealth that is financial speculation. But we will have to fight for it…

Britain can’t properly provide for its people without a complex web of manufacture and technology. For all the talk of services, it needs industry.

Once we were the workshop of the world; much has gone. Now the service sector dominates Britain’s economy, contributing around 78 per cent of the country’s Gross Domestic Product.

Even after all the deliberate destruction, some key industrial areas remain – aircraft, pharmaceuticals, for example, and the motor industry (see following pages). To be in balanced, rude health our working class needs to enforce a restoration of industry in Britain.

It won’t happen automatically from the normal processes of capitalism. Governments come and go. Sometimes lip-service is given to it – remember Osborne’s “march of the makers”. They may even say it might be a good idea to end our reliance on services and finance. But nothing happens.

Look at what has happened over the desperate need to replace and renew our nuclear industry to prevent an energy crisis. There is endless talking, endless prevarication; there is no commitment, because presumably successive governments fear rebuilding our strength.

If it has to be enforced, how do the people of Britain press for the restoration of industry? It won’t be by petitioning, or pleading, or making a moral case, but by unceasing pressure of a nation of workers who will not let it drop. Ways must be found of forcing it to the fore and not letting governments get off the hook.

‘We should do a bit of “divide and conquer” ourselves.’

We should do a bit of “divide and conquer” ourselves. Finance capital is the biggest enemy of industry in Britain; it is loath to invest in industrial rebuilding. Therefore, it should be isolated; we should engineer splits, rifts and divisions inside the capitalist sphere.

Let’s have unity against finance capital. Together workers and industrial capitalists have enough clout to negate finance capital and to force government to implement measures to rebuild our industry.

The mania of finance capitalism for manipulating unproductive wealth, where money seems to make more money but without a use value being generated or anything contributed to society, is a false dream. The only real product of such speculation is the later inevitable outcome: another destructive financial crisis.

So to bring back real wealth creation, we must enforce a national policy for industrial development and the setting up of an Industrial Investment Bank to restore manufacturing, and not just in essential infrastructure.

The willingness of private concerns to invest is negligible compared to our country’s need. There will have to be state direction of funds available at low rates of interest to build new industries, expand existing ones and update infrastructure. Other capitalist countries have adopted this method; so should we.

The industrial policy should use governmental procurement and defence contracts to support British companies. There will have to be protectionism and industrial intervention. If this brings Britain into conflict with the EU, so much the better. Others ignore EU directives when it serves their purposes.

A National Investment Bank could address the deterioration of British infrastructure. Investment in Britain’s transport, energy, water and other systems has fallen to critical levels over the past four decades.

Capitalist economies find it difficult to recover from major slumps because severe economic depression leads to a collapse in confidence and investment. Banks and companies are sitting on piles of cash or stashing them in relatively riskless, unproductive places. Only state intervention will promote and subsidise new investment.

The most effective, dramatic form of class struggle is collective action, but it can take other forms. Class struggle exists too in the battle of ideas between the two classes – particularly how to progress Britain economically and politically.

‘Real wealth creation requires us to enforce a national policy for industrial development.’

The Thatcherite hatred for state concerns and belief in privatisation has lingered for almost four decades and still exercises a stranglehold over decision making even though it is a tired piece of ideology now.

The state can be successful at developing and running things. But the old falsehood still dominates and must be broken. We need a new industrial revolution in this country so that we can make the range of things that people need and which could also be exported abroad.

Now some capitalists (though not all) favour an EU super-state that promotes freedom of movement for capital and labour, strengthening employers and weakening workers. A centralising EU state functions for the benefit of the strongest, particularly German capitalism’s interests.

So for British workers, and for workers in the other nations of Europe, the potential of protection only resides within the national framework. We cannot afford to let our nation go. Our working class needs the protective shield of our national state against the destructive incursions of the EU.

The political establishment is scaremongering when it cries “We can’t leave the EU!” If we decide to rebuild Britain and reconstruct an industrial economy, then we can prosper outside the EU, which is in a seemingly permanent slump.