A young person’s place is in their union 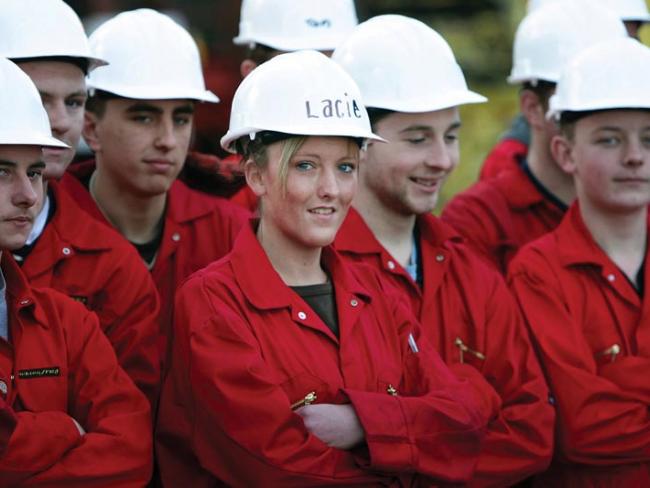 All too rare a sight: part of a group of 20 apprentices taken on for proper training by Cammell Laird shipyard on Merseyside in December 2008. Photo Getty images

Young people are not enthused by traditional politics – but that doesn’t mean they are apathetic. Bobby Duffy, managing editor of Ipsos Mori’s social research unit, says, “The younger generation is not uninterested in current affairs…. It is remarkably focused on particular problems that it wants to resolve.”

Harnessing and directing that interest where young workers have economic power is not easy. The lack of full-time, permanent work, the growing number of short- and zero-hours contracts, the use of agencies and other similar factors all diminish union membership levels among young workers.

Lefteris Kretsos, a researcher in trade unionism, found in 2014 that there is no serious evidence that young workers have negative attitudes towards trade unionism. Union membership levels for younger workers are declining faster than for older groups, but there is good reason to believe there is an unsatisfied demand for unionism among the young.

He concluded that “In essence, the low levels of trade union membership should be seen as the outcome of employers’ resistance and hostility to unionisation, as well as the concentration of employment of young people in non-unionised private-sector services and small workplaces.”

The jobs that young people hold, the industries they work in, whether there is a union in the workplace, as well as the decline in the number of large workplaces and in public sector employment, are all key factors.

Kretsos found that young people are less likely than older workers to have opportunities to join a union, by virtue of their limited experience in the workforce. They may not encounter a union or a unionised workplace. Research examining whether young people would join, if they had the opportunity, found higher levels of unmet demand for union membership among young people than older people. This is true in Britain and also the US, Canada and New Zealand.

With these issues in mind, unions have attempted to create a “portable” or “open source” form of union membership for workers, cheaper than full membership, and moving with the worker between transitory jobs. Organising in this way has become the dominant approach to renewal taken by British unions “because of the lack of other credible strategies for renewal and revitalisation” according to one academic in 2009.

Many trade unions in Britain have established youth committees and youth forums. Unison for example has dedicated structures for young members as well as a young members’ forum and weekends away. This is a means to get young people interested in unions and their issues, although the attendance is generally low.

Young members are involved at all levels of Unison, including the National Delegate Conference, the supreme policy making forum of the union. Unison, along with Unite and the GMB, is active in “community level” unionism, trying to encourage young unemployed people to join a union. But this is a shabby substitute for workplace organising and getting into workplaces where trade unions have been derecognised. The idea is a direct import from the USA where “community” is used to displace recognition of class. That makes it dangerous, as it is sectarian, divisive and divorced from traditional working class organisation.

‘We know that many young people want to join trade unions.’

We know that our young people are in desperate straits. They have few good work opportunities, they can’t afford anywhere to live to start their own families or even move to a job. We know this is all seriously affecting their health and wellbeing. But we also know that many want to join trade unions, which have to accommodate the precarious conditions under which young people work.

And those in work?

People in the media and fashion, for example, allow so-called interns to work for nothing. They actively recruit them to work long hours for no pay at all, knowing they are desperate to add work experience to their CVs.

In strongly unionised workplaces there are few core branch positions held by young members. Trade unions are aware that branches are too often run by older members, many of them retired and out of touch with the workplace.

Young people are suffering the biggest pay squeeze of any age group, currently earning 13 per cent less in real terms than in 2007. Their entry into the workforce at this lower level of pay has pulled wages down overall.

There is evidence that young people are looking for a way to defend themselves, to fight the War on Youth, alongside other, older workers doing the same. But they are also looking for opportunities to argue, discuss and understand better the world they live in to help them take control of their lives. For this, they need look no further than the CPBML.