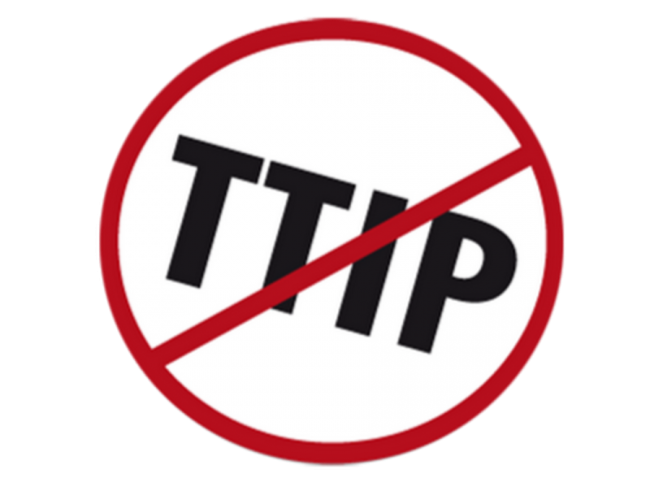 The TTIP roadshow came to Westminster in February – but nobody is listening any more.

A worried EU Commissioner for Trade Cecilia Malmström paid a visit to London on 16 February. Maintaining the EU position on growth and jobs despite all evidence to the contrary, she repeated previous attempts to revive support for TTIP, this time promising “maximum transparency – for the first time ever”! Negotiating texts would be published and explained, she said.

So now we ignorant masses can at last “read what TTIP is all about”. Before, the only access to negotiations affecting millions of people was via a reading room in Brussels, limited to one British representative who was prohibited from recording his or her findings. Admitting to the shadowy workings of the EU does not however herald an end to secrecy if that is what “business confidentiality” demands.

‘The deal seems unlikely to survive, though not yet in its death throes.’

The successful signing off of TTIP is a priority for Malmström’s boss, EU president Jean-Claude Juncker, but he has handed her a poisoned chalice. Support was flagging even before she took office last November and opposition is now so widespread that the deal seems unlikely to survive, though not yet in its death throes.

There is increasing opposition in the US Congress, and the necessary unanimity in Europe looks hard to achieve, if only because if Greece remains in the EU Syriza have vowed to oppose the deal.

Talks are suspended pending reworking of the most toxic element ISDS, with its potential to impoverish whole countries and industrial sectors. As a gigantic model of a TTIP Trojan Horse tours Europe, Malmström makes it clear that ISDS will not be revoked.

Even if TTIP were agreed in principle, she warns that it would be barely possible to water down protection for corporate investors without abandoning the whole project. The final draft scheduled for the end of 2015 will not necessarily include a reformed ISDS for scrutiny, and even if it does, the EU Council of Ministers and the European Parliament will have the final say, whatever Westminster may say or think.

Every time the EU speaks on TTIP, it is condemned out of its own mouth. Malmström’s fellow commissioners have tried to imply that all public services would be excluded, but she contradicted them (and her own previous statements on health, education and water management) saying that only “publicly funded” health services would be protected. This too is an assertion rather than a fact. Even where EU publications indicate that state monopolies will be protected, this is contradicted elsewhere when referring to services of general economic interest such as utilities and public services, to be “governed by normal competition law”.

It is just such EU incompetencies, contradictions and uncertainties around the scope of ISDS that, happily for workers, have led to its rejection so far. And in Britain the distinction between public and private services has become dangerously blurred.

‘The government is not so much interested in trade as in privatisation.’

The government is not so much interested in trade as in privatisation. Private companies often describe themselves as “public service companies”. Recent legal advice to the union Unite is that it is not possible to exclude public services from trade disputes without this being explicit in the text – which it is not. The Unite lawyer warned that TTIP would “promote the risk of suppressing future healthcare legislation”.

Malmström admitted there was double-dealing going on. EU leaders want TTIP secured, she said, while pretending to side with protesters at home. Westminster is riddled with MPs sending mixed messages.

It is all about “scrutiny” and no place for opposition, as 38 Degrees found to its cost. MP Geraint Davies’ early day motion on TTIP passed in January without the need for a division. That was the most that could be expected of Westminster, but it did not oppose TTIP, merely calling for the right to scrutiny.

As one MP admitted: “The truth is that this place lacks proper ways to hold ministers to account for what they do or decide in Europe on these trade deals.” And on everything else, he might have added.

There is one simple solution: Leave the EU now! Trade with the USA on our own terms!