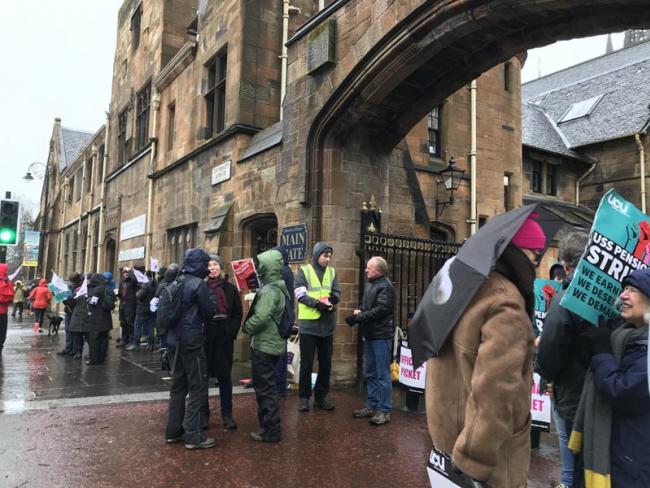 24 February: floods and blizzards notwithstanding, Glasgow pickets were out in force. Photo Workers.

University and College Union (UCU) members are staging the UK’s biggest ever university strikes. Staff began their second bout of industrial action this academic year with more universities – over 74 compared with 60 last November – joining 14 days of walkouts. Beginning on Thursday 20 and Friday 21 February the action, unifying university staff across Scotland, England, Wales and Northern Ireland, will escalate over a further three weeks.

The dispute centres on the sustainability of the Universities Superannuation Scheme and the rising pension contributions for members, and on universities’ failure to make significant improvements on pay, equality, casualisation and workloads.

As in November, the students are again supporting their lecturers. Writing in the Guardian, National Union of Students vice-president for higher education, Claire Sosienski Smith, said the marketised university system had hiked fees and cut staff pay, and therefore it was no surprise students backed their staff.

The action in 2018 saved the Universities Superannuation Scheme from the ravages of the EU’s European Insurance and Occupational Pensions Authority accounting mechanism. This was a fantastic achievement. But the UCU is still unwilling to acknowledge that this is where the threat to the pensions scheme originates.

Inevitably, the negative impact the increase in pensions contributions has on staff pay makes the fight to bring pay levels back up to their 2009 value that much harder. Even according to findings from the Universities and Colleges Employers Association, pay is already down by around 17 per cent in real terms.

The increased use of casual staff, as elsewhere in the labour market, has been one of the elements helping to bring pay down. A big element of the dispute is against casualisation, in favour of permanent contracts. The UCU, though, has not wanted to link casualisation, or low pay, to the reserve army of labour made possible by the EU’s “freedom” of movement, which the union continues to champion despite the election result. Redressing the gender pay gap in the university sector is the fourth important element in the dispute.

The UCU lays the blame for the renewed strike action squarely at the door of the employers after Universities UK refused to make a new offer on pensions.

Across the UK, picket lines are bigger than in November and the force of a national union is being felt by the employers. What stronger message could there be to workers that the separatist line being peddled by nationalists in Scotland, and those in the UK who think they can get “socialism in one region”, is as reactionary as it is divisive and will play into the hands of the employers at every turn. The UCU is showing how a strong, unified force of workers can make its power felt across the UK.