TTIP: the politically premature 'death' of a trade treaty 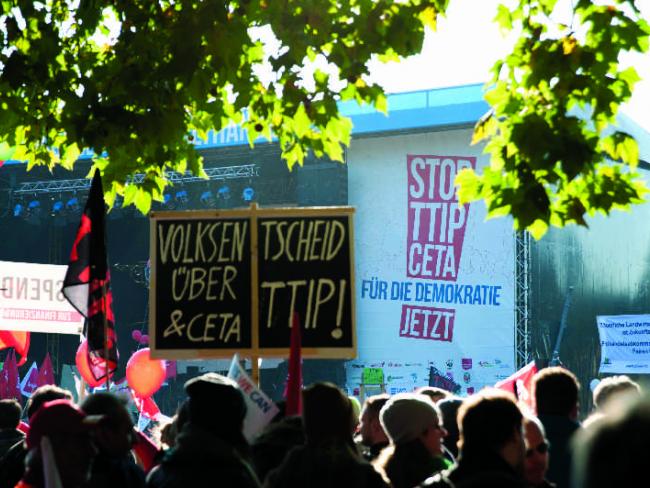 Last week the headlines in the europhile press were all singing from the same hymn book. TTIP, they said, is effectively dead, killed off by the latest leak of negotiating papers by Greenpeace Netherlands.

Leading the charge was EU cheerleader Owen Jones in The Guardian. TTIP has a “bleak future ahead”, he said. Though not completely dead, it “lies wounded, possibly fatally”. TTIP has been “derailed”, said the piece.

Further down we come to the real point of the article: “this has real consequences for the EU referendum debate”. Ah, so we can all now safely vote to stay in the EU?

Two days earlier, The Guardian’s economics guru Larry Elliott had proclaimed that “TTIP has been kicked into the long grass, perhaps for a very long time”.

Would that it were so.

In fact, the only thing that could put a stake through the heart of TTIP would be the collapse of the EU. Anyone who has studied the history of the EU, back to the US-led Marshall Plan after World War Two, knows that American corporations have backed the idea of a European superstate every step of the way.

The reason is this: the whole point of the European Union is to create a single continent-wide market across which the giant American corporations may freely roam, unencumbered by tiresome restrictions such as national sovereignty. Without TTIP, there’s really little point to the EU – much easier to do everything via NATO.

‘For once, Brussels is right.’

So what does the European Commission say? That talk of TTIP’s death is “alarmist” and “a storm in a teacup”. For once, Brussels is right.

Despite the initial talk that TTIP would be negotiated quickly, that was never going to happen. Complex free trade deals always take “a very long time”. Negotiations began in the summer of 2013, so the talks have been going on for less than three years.

Compare that with the more than seven years it took for the US to get its Trans Pacific Partnership (January 2008 to October 2015). Or the more than five years it took the EU to negotiate the CETA trade agreement with Canada (March 2009 to August 2014).

These are massive agreements. CETA runs to 1,598 pages. At around 5,600 pages TPP is so long that it isn’t even accessible as one PDF file – if you want to search across the entire document, you need to go to Wikileaks.

The latest leaks, by contrast, come to 52 pages. They are hard to read, referring as they do to other documents. The key one is headed “Tactical State of Play of the TTIP Negotiations”, and it focuses exclusively on where the differences between the US and the EU lie.

The fact that they show differences, sometimes deep ones, over specific items should come as no surprise. Without differences, these agreements wouldn’t take so long.

What the leaks did give was an insight into the wide scope of the TTIP talks, and the number of areas of our lives that are under threat.

The reality is that TTIP is still alive and well. Nothing has been “derailed”.

The negotiations are still going on, working methodically through each point at issue, all timetabled for the months ahead. In Europe they are run not by elected politicians but by the European Commission, which is not accountable to the people of Europe and says it isn’t. The eurocrats in the Commission are dedicated to their task. They are persistent. A small leak won’t put them off their stride.

Owen Jones said his claimed death of TTIP should be “a launchpad for a movement to build a democratic, accountable, transparent Europe governed in the interests of its citizens, not corporations” – the hopeless fantasy of “left” apologists for the EU down the years, and one of the lies that sustains the Remain crowd.

Face the truth. The EU cannot be reformed, only killed. The EU and the US are committed to finishing TTIP, however long it takes. The only way to stop it is to dismantle the EU – for which the first and crucial step will be to vote Leave in the coming referendum.