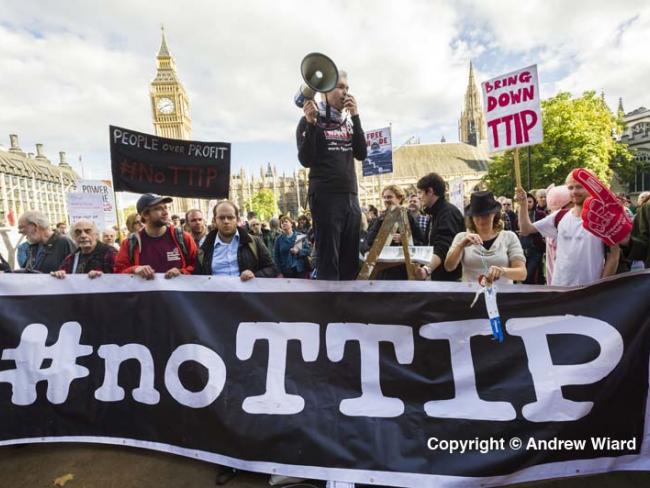 Capitalism doesn’t understand merely economic interests. It wants the elimination of all opposition…

Opposition to the Transatlantic Trade and Investment Partnership is growing. On the face of it, this is a free trade agreement between the European Union and the USA, but it has dangerous economic, legal, and political consequences.

TTIP could force a future government to privatise the NHS and education, and its provisions for Investor State Dispute Settlements will make private corporations more powerful than elected governments.

For both of those reasons it is right to oppose TTIP, or more properly the EU’s TTIP, as it is the European Union which is the mechanism for forcing it on us.

But bad though these things are, they are not the Treaty’s most dangerous aspect. TTIP is a treaty aimed at war. The countries signed up to TTIP constitute a bloc for war, just as certainly as the Triple Alliance and the Entente Cordiale were military alliances 100 years ago.

A bloc for war

This new war bloc includes NATO (and therefore Britain), plus other allies dominated by the US across the Pacific, now being organised into the Trans-Pacific Partnership (TPP): Australia, Brunei, Canada, Chile, Japan, Malaysia, Mexico, New Zealand, Peru, Singapore and Vietnam. Plus the Gulf States, and others.

TTIP seeks to establish a one-sided trading system just as the US tried to establish the FTAA, the Free Trade Area of the Americas, which foundered on the opposition of countries now joined together in CELAC, led in their opposition by socialist Cuba.

In those countries that have not signed up to TTIP or TPP, governments are less dominated by transnational, essentially US, companies. So the clash is the old clash in new guise: capitalism against the people. A future war would be just that class-based war that bourgeois pundits have said could not happen anymore, because they claimed the only threat of another war came from the existence of the Soviet Union.

In fact such a war could not have even been contemplated had the Soviet Union still been with us. The force of its deterrence upon belligerent western capital was unfortunately underestimated by most workers in most countries. The detrimental effect of the USSR’s absence was demonstrated by the fact that as soon as it collapsed war broke out in Europe for the first time since 1945, in Yugoslavia.

Then we had the Middle East, where the first Gulf War, leading to a process which has directly created the chaos in the region and one of the greatest war threats we now have. In the 1990s, the first post-Soviet decade, 4 million people died in 49 separate armed conflicts, 90 per cent of them civilian.

‘As soon as the USSR collapsed war broke out in Europe.’

The countries signing up to the TTIP principles are heavily armed, or, like Japan, are re-arming rapidly. And all of them immediately offer to invade a country alongside the US when it, or its leader, decides it needs to intervene militarily anywhere in the world.

That is what lies behind the attacks on Russia about the Ukraine. Once it became clear that Russia was not going to join TTIP, or for that matter join NATO or the EU either, a major effort was made to detach the Ukraine from its position as an historic ally of Russia.

After the demise of the Soviet Union, Russia is no longer a symbol or centre of working class power. Yet – by being outside the US-EU bloc – Russia is still seen as a rival in the world trade that TTIP seeks to dominate, and is therefore seen as an enemy.

This article is an edited extract of a speech delivered at the CPBML meeting "One world - divided by class" at Conway Hall in London on 14 January.