Skip to main content
Home » News/Views » Who will claim this century?

Who will claim this century? 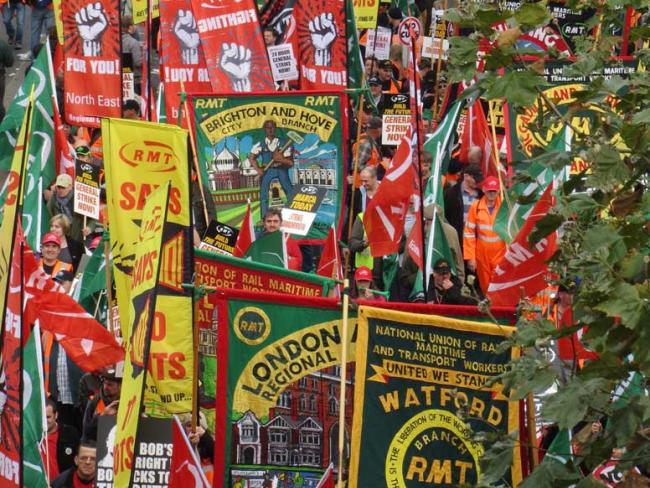 Workers on the TUC march, 20 October 2012 – for “A Future that Works”, said the march’s slogan. Photo Workers

Part 1 of our feature on class, published in July, showed that the concept is central to making sense out of both our day-to-day experiences and in the world at large. In Part 2, we argue that action as a class rings the death knell of the disastrous economic, political and social system of capitalism…

Go back six centuries and you find that our origins as a class and the development of our country were distinct and different to that of Europe. By the 15th century feudal obligations and relationships had broken down here, rejected by English peasants eager to exploit the labour shortages brought on by the catastrophic loss of life in the Black Death.

Wage labour and capitalist practices became the norm in English agriculture centuries earlier than elsewhere. This prevalence of wage labour in the countryside was a vital precursor of the industrial revolution and probably a key trigger for it.

The British working class was the first in the world to emerge off the land. Already by the 1850s workers in Britain constituted the majority, subsequently developing even further in scale as our country became overwhelmingly proletarian in character.

Being the first to form into a class, with no other experience to copy, we had to work things out independently, devising our own method and philosophy of defence against the ravages of early capitalism that threatened to completely exhaust or annihilate us.

The method found was collective: combine in trade unions or combinations, as they were known. The objectives were practical, dictated by a need to survive and repel the assault upon us. So the questions were: how to raise starvation levels of pay; how to reduce incredibly long hours of work (up to 14 hours a day or more); and how to improve appalling conditions.

Of necessity, our fledgling trade unions began locally – in parish, village, mine and town – with deep roots enabling them to endure and flourish. Not imposed from outside or bestowed by condescending do-gooders, they were forged by working people alone, responding to need. Never artificially created by external political organisations or religious groups (as happened much later in other countries to the great detriment of unity and power), they enjoyed strong commitment and bred fierce loyalty.

Typically they resided on the fusing factor of a common trade or skill that brought incredible strength as everyone involved had a common identity and shared similar concerns.

Because capitalism feared trade unions, it tried to destroy them, notably with the 1799 and 1800 Combination Acts. As a result, early unions were often born in conspiracy, defying the rulers’ law, and survived only because of the stubborn, unstinting allegiance of many generations of working people.

Later in the 19th century trade unions had to grow nationally to better combat the opposing class. There was an absolute suspicion of building unions of those who did not work at the trade, best illustrated by the practice of the leading craft union, the Amalgamated Society of Engineers. Its rules required that workers control and run the union. Its decision making structures confirmed the leading role of the lay membership with a sovereign national committee composed of elected workers who had to be working at the engineering trade. As unions prosper again they will need to consider control and initiative in the hands of workers not just participation.

At some point, rather than striving for revolution in a direct route to supremacy and fashioning society in its own image, our class opted for survival with dignity but within the confines of capitalism, consciously rejecting the abolition of capitalism. There was no hoodwinking, no misleading.

Eventually, trade unions endorsed the formation of a Labour Party in 1900, our most retrograde act, a turning away from our origins and traditions, a political and philosophical denial of the working class as deciding force. This backward step has constricted and side-tracked us for over a century. We surrendered ultimate control of our politics to a separate caste of outsider politicians, inextricably intertwined with the bourgeois political system.

Capitalism straddles the economy, suffocating society like the alien occupying force it is. There is nothing natural about a market’s over-lording control; only capitalism’s relative longevity gives it a false respectable veneer. Capitalism distorts how production, institutions and services are run and operated, foisting irksome management techniques and unnatural methods over everyone, intending to confuse and undermine worker professionalism.

For instance, in education the distortion is produced by schools competing against each other in league table results, obsessions about data, manic management, constant inspections and monitoring, an Ofsted regime pitted against teachers’ professionalism, and so on.

Only the widespread organised network of an extensive working class can break the economic fetters and dispel the political oppression that constrains everyone. The combined skills and talents of our class will challenge capitalism and also be the means of reconstruction under socialism. Because we can, our class must effect a change and move history on to new ground.

Capitalism in its dotage signifies an unsatisfactory past and a declining future. The working class wants a productive economy whilst capitalists can only spawn speculative booms and busts. That is why at the 16th Congress of our Party we made the call for a regeneration of industry in Britain.

Though capitalism is utterly dependent on workers’ labour power to generate profits, a working class is not similarly reliant on capitalism. It can branch out on its own as proven by the October Revolution in 1917 and other revolutions since.