Skip to main content
Home » News/Views » Britain and the world

Britain and the world 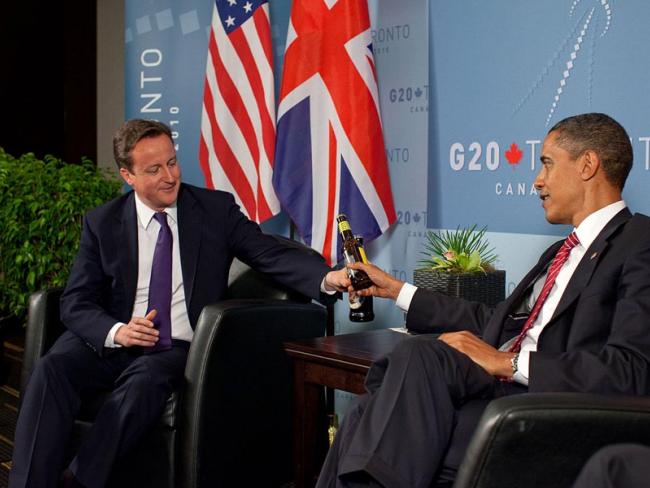 Best buddies (photographed at the G20 summit in 2010). Now Obama says no EU, no TTIP. Thanks! So if we leave the EU, no TTIP for us. Photo Pete Souza.

Barack Obama is not the first US president to lecture Britain about its place in the world. But he certainly chose a bizarre way to threaten the people of this country. Read his words carefully:

“I think it’s fair to say that maybe at some point down the line there might be a UK-US trade agreement, but it’s not going to happen any time soon because our focus is in negotiating with a big bloc, the European Union, to get a trade agreement done. And the UK is going to be in the back of the queue,” he said at 10 Downing Street, with David Cameron at his shoulder.

So if we leave the EU, no TTIP for us. No TiSA either. Millions of us will have heard that “threat” and wondered whether he might be prepared to put the promise in writing.

In fact, leaving the EU might be the only way we can ditch these odious free trade agreements.

In Obama’s statement we see another ugly truth for the Remain crowd: the US loves the EU. It was there at the start and it enables the US to bully and dictate to 28 countries in one fell swoop. A single market, neatly parcelled up and handed over to the US and the transnational corporations. The free movement of vulture capitalists.

‘The entire establishment has lined up to instruct us.’

The people of Britain will take note. The entire establishment has lined up to instruct us (see A vote for a future). Now they are backed up by the biggest international bully of all – the US government. But we don't have to follow instructions on this one. We still have a choice.

That choice is straightforward: Do we want a country that is recognisable as Britain, one that can take its own decisions about its future, that can hold its politicians to account, that can keep what is precious to us?

Membership of the EU has already cost us a great deal of our identity and our ability to act on our own behalf. Continued membership will finish it off.

We are told that independence will diminish Britain’s influence in the world. That’s a breathtaking lie, even by the miserable standards of the Remain arguments.

Here’s the truth: With the EU’s “exclusive competence” over trade the UK has lost its voice at the World Trade Organization, where it is represented by the European Commission. At the WTO we have at best 1/28 of a voice, dwindling with each new member state. Note: the UK is still a member, but it neither attends the WTO nor speaks there.

If we left the EU, we could take up our seat and the UK would have a full voice. Call that diminished influence? With an economy less than a seventh the size of the UK, non-EU Norway has its own seat on the WTO – and it currently chairs the body!

Even more crucially, the EU is angling for Britain – and France – to give up their seats on the UN Security Council so that Brussels can take their places. If you want evidence, see the resolution on the role of the EU within the UN passed by the European Parliament on 24 November last year, by 488 votes to 137. Then, if you wish, look at who voted for it: the list includes the whole rotten cohort of Britain’s Labour and Green MEPs.

That’s the topsy-turvy world of the europhiles: boost Britain’s influence in the world by surrendering it to Brussels, which will then surrender the whole lot to TTIP, TiSA and the US.

On 23 June we have the opportunity to assert the independence of the UK. It’s a prospect that terrifies the battered bastions of capitalism. We welcome that prospect with open arms.